The Case Against Writing Manuals

In The Atlantic‘s 2010 Fiction issue, Richard Bausch makes a powerful argument against writing manuals: Now, I’m not speaking about books dealing with the aesthetics of the task, or with essays about the craft and critical analysis of examples of it—and we have several very fine volumes in that vein (Charles Baxter’s Burning Down the House and John Gardner’s The Art of Fiction come to mind)—no, I’m talking about straight how-to books, most of which claimed to offer shortcut advice, practical instructions on “writing your say the genre,” and even in some cases “secrets” of the novelist’s or story writer’s […] 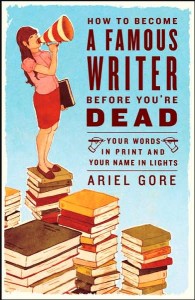 How to Become a Famous Writer Before You're Dead, by Ariel Gore

I haven’t read a book on writing nearly as useful as Ariel Gore’s How to Become a Famous Writer Before You’re Dead: Your Words In Print and Your Name in Lights since I bought a copy of Anne Lamott’s Bird by Bird. This is a must-have DIY how-to for any writer interested in success, whether that means starting with homemade zines, jumping straight into big-time publishing, or working part-time on that novel while slaving away at your day job. Gore’s advice will help writers get the word out, get noticed, and get famous—without being a colossal jerk, fame whore, or media spammer.