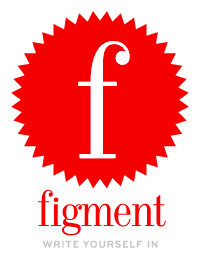 With gangbusters press coverage on Monday, Figment.com launched a fiction-sharing site. Co-founded by Dana Goodyear, staff writer at The New Yorker, and Jacob Lewis, a former Managing Editor at The New Yorker, the site sets up its mission like this: Figment is an online community to create, discover, and share new reading and writing. Follow your literary obsessions. Find fans for your work. Read the latest by your favorite authors. Vote up the best stories. Embrace your inner book nerd. Read. Write. Procrastinate. Repeat. Whatever you’re into, from sonnets to mysteries, from sci-fi stories to cell phone novels, you can […]

Biblioball 2010 from Desk Set on Vimeo. ‘Tis the season, and that means New York’s annual Biblioball has arrived! The event occurs on December 4th and those of you who have attended before know what to expect: not just a winter formal for the “well-read and well-attired,” but an incredible way to support Literacy for Incarcerated Teens. Starting at Brooklyn’s The Bell House at 8 pm and going into the wee hours of the morning, attendees have plenty to look forward to: In addition to these food and drink items, Happy Hour ticket holders can mingle with local literary stars, […] In one of the coolest promotions ever, One Story will be handing out free issues—each containing a complete short story—tomorrow at Brooklyn subway stations. Says the magazine’s blog: From 7:30-9 am on Wednesday, September 8th, volunteers will be handing out free copies of One Story at subway stations throughout Brooklyn, as part of the “One Story, One Borough” campaign, in our ongoing effort to save the short story. Each issue will include an invite to a One Story reading by Brooklyn OS authors James Hannaham, Reif Larsen and Caedra Scott-Flaherty at noon at The Brooklyn Book Festival on Sunday, September […]

Last week we told you about Dzanc’s Write-a-Thon, which runs September 2-5 and helps raise money for Dzanc’s Writer-in-Residence Program and the Dzanc Prize. If that got your creative juices flowing, here’s another write-a-thon-type opportunity: the International 3-Day Novel Contest. Yes, you read that right: the goal of the contest is to write a novel in just 3 days. (Nanowrimo ? Ha! We laugh at your extra 27 days!) At The Millions, Sean Di Lizio explains: The 3-Day Novel Contest is held annually in early September on the Canadian Labor Day long weekend. In 1977, a writer’s group in Vancouver […] 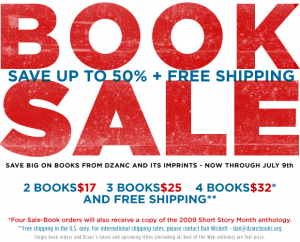 As FWR readers know, we’re big fans of the work that Dzanc Books does for the literary world. Not just in terms of publishing, but also education. In addition to the Dzanc Writer In Residence Program, which helps put writers into Michigan schools, and the Dzanc Prize, which gives money to writers to conduct writing workshops in places like VA hospitals, prisons, and in refugee communities, they also offer online tutoring and manuscript consultation through the Dzanc Creative Writing Sessions. All of these are necessary and enriching programs, and we are grateful to have had the opportunity to partner with […]

Spring submission season is upon us. Here is a selection of postings that we’ve received in the last few weeks from journals seeking work. Please feel free to add others in our comment field, or write us: fictionwritersreview@gmail.com Submit Your Entry Now! Short Fiction Contest 2010 Submissions will be accepted February 1st-February 28th, with the winner announced in late spring. Submissions must be 1200 words or less. There is no entry fee. Louise Erdrich, winner of the 2009 Kenyon Review Award for Literary Achievement, will be the final judge. The Kenyon Review will publish the winning short story in the […]

While many publishers and literary magazines are closing their doors, Dzanc has opened theirs to Keyhole Press. As of January 1st, Keyhole will join Absinthe: New European Writing, OV Books, Black Lawrence Press, and Monkeybicycle, as part of the Dzanc collective. This from the Dzanc press release: “Keyhole has an impressive list of writers including William Walsh, Stephanie Johnson, Shellie Zacharia, and has forthcoming work scheduled from Aaron Burch and Matt Bell, and also publishes the wonderful Keyhole Magazine, a fantastic literary journal.  Furthermore, Keyhole is developing a strong presence in the Nashville literary scene.  Dzanc is excited to formalize our […] 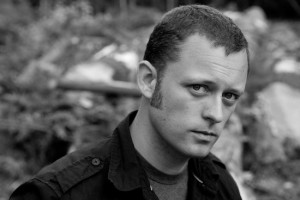 The Paris Review and Barnes & Noble Series in NYC

New York readers, ring in the New Year with a month of Monday readings to celebrate The Paris Review’s iconic interview series. Starting this Monday, January 4th, the Barnes and Noble flagship store at 86th and Lexington, in New York City, will host a month-long series of interviews showcasing authors, artists, and editors discussing writers, writing, and the writing life. The first event will feature Benjamin Percy–one of our favorite authors here at FWR–who will be interviewing Carol Sklenicka about her recent biography of Raymond Carver. Here is the schedule of the events: Monday, January 4th at 7:00pm: Benjamin Percy, […] 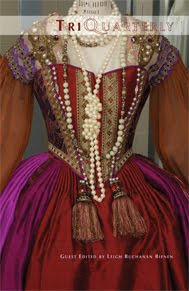 TriQuarterly to be Shut Down after 45 Years

Some sad news: recently, we heard that venerable literary journal TriQuarterly was transitioning to an online-only format. It’s sad enough to think that one of the oldest and most respected literary mags would no longer be in print, but there’s more to the story, as shown in this email from Ian Morris, TriQuarterly‘s associate editor: I just wanted you all know that as of spring 2010 after forty-five years TriQuarterly magazine will cease to exist. Susan Hahn and myself were notified of this fact yesterday just hours before the press release announcing the decision was sent out. After terminating TriQuarterly’s […]