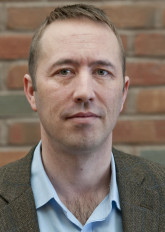 “More than anything, I wanted this book to take on the processed food industry. As a satirist, I wanted my novel to serve as a kind of corrective to it, if only by asking readers to question what it is they’re eating. But the food industry doesn’t exist in a vacuum, so it’s what it reveals about American life that is really at the center of the novel.” I think deep down, every writer believes that there’s some magic formula for inspiration. Get the right time of day, the right location, the right kind of pen, even the right sitting or lying position, and bing! Writing Happens. But for some writers, food is part of the magic formula. One of my writing teachers used to swear by Cherry Coke—and wouldn’t drink it unless she was writing, for fear of using up the magic. For me? Red candy: Swedish fish are best, but Twizzlers will do in a pinch. To that end, artist Wendy MacNaughton provides this illustrated guide […]

Cooking from writing about eating

When I was in elementary school, I used to read at the dinner table (my parents were just happy I was at the table!) and I’d always save particular books for mealtime perusal. Specifically, they were books that made me hungry with their descriptions of food. There was Laura Ingalls Wilder’s Little House series, in which even a meal of yesterday’s bread with a smear of salt pork fat was treated as a feast. There was Sydney Taylor’s All-of-a-Kind Family, which was my introduction to foods I wouldn’t taste until years later: hamentaschen, challah, latkes. And in Jean Craighead George’s […] 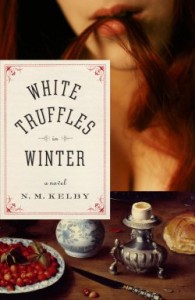 Ethereal mashed potatoes, langoustines in Moët, cherries fit for a queen. N. M. Kelby’s novel, White Truffles in Winter is a sumptuous feast, the celebration of food and table only outdone by the seductive women who surround French chef Auguste Escoffier. Hungry? Read on.

A new shop in Madrid, La Pizzateca, serves up tasty combos of books and pizza. Reports Springwise: The brainchild of Spanish publisher ES Ediciones, La Pizzateca offers a wide range of artisanal pizzas and calzones made from natural ingredients for enjoyment in-house or to go. It’s also a bookstore, however, and it even offers specials to encourage both pursuits. One, for example — dubbed the “menú de las letras” — includes a slice of pizza and a book for just EUR 5. Sounds like a clever new way to market books—and I love the idea of pairing pizzas with literature, […] 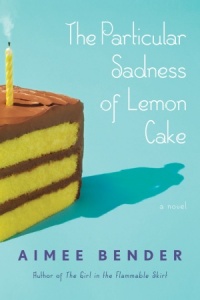 The Particular Sadness of Lemon Cake, by Aimee Bender

If you are what you eat, what happens when someone else eats what you are? In Aimee Bender’s latest novel, The Particular Sadness of Lemon Cake, 9-year old Rose first experiences this conundrum when she tastes her mother’s birthday cake, only to come away with the uncomfortable understanding of her mother’s lonely dissatisfaction with life. The cake betrays the inner feelings of the cook. Over the course of the novel and Rose’s life, the predicament continues, building to an unwanted fixation of what constitutes food and those who grow and prepare it.

Just in time for the scorching heat that’s blasting much of the east coast, food blog Umamimart offers a recipe for the “Literary Agent,” a cocktail that’s “a cross between a Whisky Sour and a Hemingway Daiquiri.” But it’s not the kind of agent you think. Says the blog: Writer, adventurer, ravenous drinker, hunter, early supporter-turned-critic of Fidel Castro, exuder of much machismo, and all around man’s man and true bon vivant–these are all the various adjectives and aspects of Ernest Hemingway’s life that most recall when describing the man. But there’s one more aspect that’s lesser known, and has […]

Clare: Henry holds up an onion and looks at me gravely and says, “This . . is an onion.”

Henry has decided to teach me to cook.

Henry: Lourdes brings small plates of exquisitely arranged antipasti: transparent prosciutto with pale yellow melon, mussels that are mild and smoky, slender strips of carrot and beet that taste of fennel and olive oil. We eat Nell’s beautiful rare tuna, braised with a sauce of tomatoes, apples and basil. We eat small salads full of radicchio and orange peppers and we eat little brown olives that remind me of a meal I ate with my mother in a hotel in Athens when I was very young. We drink Sauvignon Blanc, toasting each other repeatedly. (“To olives!” “To baby-sitters!” “To Nell!”). Nell emerges from the kitchen carrying a small flat white cake that blazes with candles. Clare, Nell, and Lourdes sing “Happy Birthday” to me. I made a wish and blow out all the candles in one breath. “That means you’ll get your wish,” says Nell, but mine is not a wish that can be granted.

Clare: “But don’t you think that it’s better to be extremely happy for a short while, even if you lose it, than to be just okay for your whole life?”

Richard DeTamble: “I’ve often wondered about that. Do you believe that?